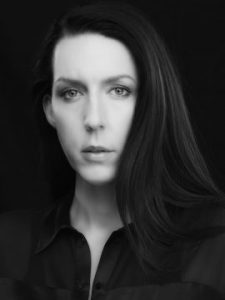 LUNA M. FERGUSON (Ph.D.) is a trans (they/them) filmmaker, writer, artist, and advocate. Their advocacy for non-binary legal recognition has contributed to policy changes in Canada. Ferguson’s filmmaking includes the award-winning Whispers of Life (2013); Limina (2016), which was shown at festivals around the world and praised for its trans inclusivity; and the queer love story Henry’s Heart (2019). Their writing and advocacy efforts have been featured in international publications including HuffPost, VICE, BuzzFeed, Teen Vogue, OUT Magazine, NBC News, The Guardian, and the Toronto Star. Ferguson lives in Vancouver, British Columbia, with their partner Florian. Their first book, Me, Myself, They, a memoir, was published by House of Anansi in May 2019.

Bachelor of Arts with Honours Specialization,
Film Studies and Minor in Gender, Sexuality and Culture Studies, Department of Film, The University of Western Ontario
Thesis:  The Exclusionary Production of Transgendered Bodies in Transnational Cinema

November 2017 “What It Means To Transition When You’re Non-Binary”Teen Vogue.https://www.teenvogue.com/story/non-binary-transitioning

August 2017 “We Should No Longer Be Erased” VICE News. https://news.vice.com/story/its-time-for-non-binary-options-on-id

May 2017 “Why I’m Applying for a Non-Binary Sex Designation on my Canadian Birth Certificate” OUT Magazine. https://www.out.com/news-opinion/2017/5/11/why-im-applying-non-binary-sex-designation-my-canadian-birth-certificate

March 2017 “I Imagine a Time When You See Me” BuzzFeed. https://www.buzzfeed.com/joshuamferguson/i-imagine-a-time-when-you-see-me

January 2017 “Living With Depression And Empathy As A Non-Binary Trans Person” The Huffington Post. http://www.huffingtonpost.ca/joshua-m-ferguson/depression-empathy-non-binary-trans_b_14043296.html

November 2016 “My Grandmother Recognized me as Trans the Day We Said Goodbye.” The Huffington Post.  http://www.huffingtonpost.ca/joshua-m-ferguson/recognize-non-binary-transgender_b_12829474.html

October 2016 “We are Non-Binary Trans People And Yes, We Exist.”
The Huffington Post. http://www.huffingtonpost.ca/joshua-m-ferguson/non-binary-trans-people_b_12443154.html