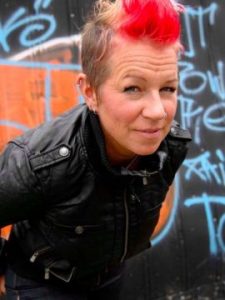 Kate Reid is a professional queer-musical-activist based in Vancouver, British Columbia. With rapid-fire wit, a raw and often irreverent delivery, Kate is a guitar-playing, harmonica-slinging, singer-songwriter and bona-fide entertainer. Her lyrics are honest and poignant, sometimes hard-hitting and sometimes hilarious and she is known for her self-deprecating and tongue-in-cheek humour. Kate’s songs tell stories and brim with social commentary: her passion is music with a message. Her critically acclaimed work as artist includes four independently released albums: Comin’ Alive (2006), I’m Just Warming Up (2009) and Doing it for the Chicks (2011) and Queer Across Canada (2013). Kate is currently designing and piloting The Queer Across Canada Musical Education Kit comprised of the album Queer Across Canada, which includes 16 songs (plus one cover song) that she wrote and recorded based on interviews she conducted with queer families; and an accompanying educational kit that links the songs to lessons and activities designed to encourage students to resist and challenge queerphobia, transphobia and heterosexism while encouraging them to embrace diversity and accept queer families and people. Kate tours regularly across Canada and into the USA and Europe, performing at folk festivals, Pride festivals, schools and live music venues.

Prior to becoming a professional musician, Kate earned a Baccalaureate in Arts from the University of Guelph, Ontario in 1994 and a Bachelor of Education from the University of British Columbia’s West Kootenay Teacher Education Program in 2000. She has over twenty-five years of experience teaching and working with youth and children in a variety of educational, community and recreational settings. Kate combines teaching with her career in musical activism by facilitating workshops and giving concerts at the upper elementary, secondary and post-secondary level. She is especially passionate about using her songs to facilitate discussions with students around gender and sexual identities, and arts-based pursuits. She graduated with an MA in Gender, Race, Sexuality and Social Justice at University of British Columbia where she is researching the nexus of folk music, queer activism and pedagogy. Besides writing, singing and performing music, Kate’s other passion is backcountry hiking and camping.